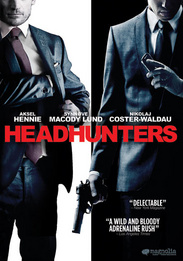 HEADHUNTERS stars the talented Aksel Hennie (Max Manus) as Roger, a charming scoundrel and Norway's most accomplished headhunter. Roger is living a life of luxury well beyond his means, and stealing art to subsidize his expensive lifestyle. When his beautiful gallery owner wife introduces him to a former mercenary in the possession of an extremely valuable painting, he decides to risk it all to get his hands on it, and in doing so discovers something which makes him a hunted man. HEADHUNTERS is based on Jo NesbÃ¸'s best-selling thriller from 2008.