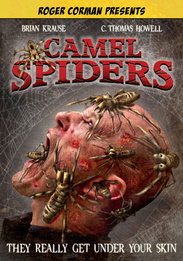 From Executive Producer ROGER CORMAN Comes The Ultimate Crawling Terror! In the deserts of the Middle East, a platoon of soldiers is terrorized by a gang of large, fast and deadly arachnids called Camel Spiders. The soldiers escape the deadly attack but accidently transport several of the evil beasts with them to the American southwest. An Army Captain (Brian Krause of âCharmedâ), a small-town Sheriff (C. Thomas Howell of âSouthlandâ and The Amazing Spider-Man), and a desperate group of locals and tourists must survive a frightening infestation of crawling carnage. Diana Terranova (Get Him to the Greek), GiGi Erneta (Raptor) and Jon Mack (Mongolian Death Worm) co-star in this cult classic from director Jay Andrews (Dinocroc vs. Supergator). Based on the actual creatures that have tormented the Armed Forces for decades, get ready for all the leaping, screeching, face-ripping horror of CAMEL SPIDERS!