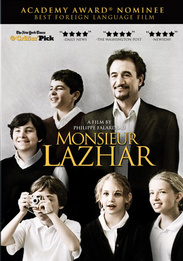 Nominated for an Oscar for Best Foreign Language Film, MONSIEUR LAZHAR tells the poignant story of a Montreal middle school class shaken by the death of their well-liked teacher. Bachir Lazhar (Fellag), a 55-year-old Algerian immigrant, offers the school his services as a substitute teacher and is quickly hired. As he helps the children heal, he also learns to accept his own painful past. This moving film features exquisite performances by Fellag and a stunning ensemble of child actors.