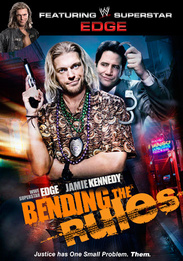 Detective Nick Blades (WWE Superstar Edge) is a New Orleans cop on trial for corruption. Assistant District Attorney Theo Gold (Jamie Kennedy, Ghost Whisperer) is the man in charge of putting him behind bars. When these two unlikely partners from opposite sides of the law stumble onto a criminal plot, theyâll need to rely on luck â and patience â to take down a dangerous killer without killing each other first. Alicia Witt (88 Minutes), Jennifer Esposito (Crash) and Jessica Walter (Arrested Development) co-star in a story that proves that when the going gets tough, itâs time to start BENDING THE RULES.

Rated PG-13 for some violence and a sexual reference.