Beyond the Black Rainbow 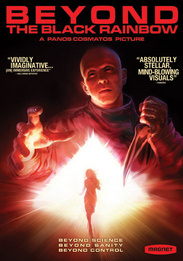 Set in the strange and oppressive emotional landscape of the year 1983, BEYOND THE BLACK RAINBOW is a Reagan-era fever dream inspired by hazy childhood memories of midnight movies and Saturday morning cartoons. Cosmatos was born in Rome in 1974 to the late Greek movie director (George Cosmatos) and a Swedish experimental artist mother. He spent his early formative years traveling all over the globe before settling in Canada. In 1981, the family lived for a year in Mexico where exposure to the strange local interpretations of American pop culture had a profound and lasting effect on his creative life. Growing up in the isolated suburbs of Vancouver Island during the 80s, he obsessed over the minutiae of heavy metal, fantasy art, and science fiction horror films, which he still does to this day. He then immersed himself in the underground art and music scenes making short films, album covers and music videos with a burgeoning group of influential and groundbreaking artists. Panos currently lives and works in Vancouver, British Columbia.