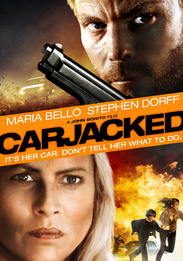 Two-time Golden Globe nominee Maria Bello of âPrime Suspectâ stars as Lorraine, a stressed out single mom harassed by an abusive ex-husband and struggling to raise her 8-year-old son. Her world changes in an instant when she and her child are carjacked by a fugitive bank robber (Stephen Dorff of Immortals) and taken on a desperate cross-country drive to retrieve his loot. But Lorraine refuses to be a victim. She is about to take control and fight back. And tonight, what she will do to survive may lead to the most shocking crimes of all. Joanna Cassidy (âSix Feet Underâ) and Catherine Dent (âThe Shieldâ) co-star in this intense action-thriller from the director of THE MARINE.

Rated R for language and violence.