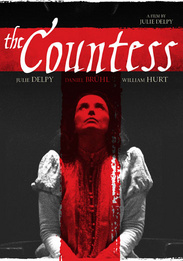 International star Julie Delpy (Before Sunrise, TVâs âERâ) scores a personal triumph by writing, directing, producing, scoring and starring in the classic horror tale of a powerful woman driven insane by thwarted passion. The newly widowed Countess (Delpy) falls hard for a charming, handsome younger man (Daniel Bruhl of Inglorious Basterds, The Bourne Ultimatum) whose father (William Hurt of The Incredible Hulk, Into The Wild) thwarts their romance. Believing her age made her undesirable, the Countess becomes obsessed with the rejuvenating power of blood taken from virgins. Soon, she is bathing in it regularly, local young women are going missing, and someone is sent to investigate the terrifying rumors â the very same young man who drove her to this madness.