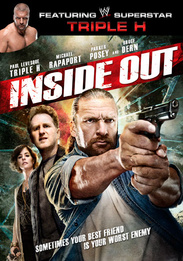 For the last thirteen years AJ (Triple H) has been behind bars, convicted of manslaughter for killing a man who intended to kill his best friend, Jack (Michael Rapaport) a high-strung low-level mobster. Now released, AJ wants nothing more than to start a small business and live a life free of crime. Unfortunately, within hours of leaving prison, Jack involves AJ in an accidental shooting leaving a man dead. When Jackâs father, local mob boss Dr. Vic (Bruce Dern), hears the news he wants the mess cleaned up, and fast. Meanwhile, Martha (Julie White) an agent for the Louisiana Tax Board, has been investigating Dr. Vic for smuggling counterfeit cigarettes into Louisiana and determined to bring Dr. Vic down and Jack. With the authorities hot on his trail, Jack is now forced to skip town. Dr. Vicâs patience is wearing thin and he decides to take things into his own hands, looking for retribution. Well aware of Dr. Vicâs violent past, AJ will stop at nothing to protect Jackâs wife, Claire (Parker Posey), the woman heâs always loved and her daughter Pepper (Juliette Goglia).

Rated PG-13 for violence and some language.