We are the Night 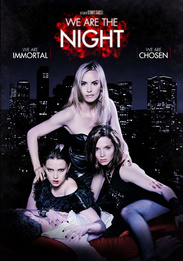 A sexy, suspenseful and adrenaline pumping vampire film, WE ARE THE NIGHT is an edgy tale of a provocative gang of female vampires living large, making their own rules and leaving a merciless trail of blood. The film centers on a 20-year-old Berlin native LENA (Karoline Herfurth) who gets by as a petty thief. On one of her nightly job runs through an underground club, she meets 250-year-old LOUISE (Nina Hoss). Don't let her age fool you. LOUISE is a glamorous vixen, who is not only the owner of the club, but also the leader of an unusual all-female vampire trio - the other two members being wild child NORA (Anna Fischer) and elegant CHARLOTTE (Jennifer Ulrich). Louise falls head over heels in love with the scruffy Lena and bites her during their first night together. Once bitten, LENA discovers the curse and the blessing of her new, eternal life. She revels in the glamour, parties and infinite freedom. But she quickly discovers that the endless blood thirst and murderous appetite of her new girlfriends come at a steep price. When Berlin police commissioner TOM SERNER (Max Riemelt) begins investigating the women, it is just a matter of time before their day comes and events spiral out of control.