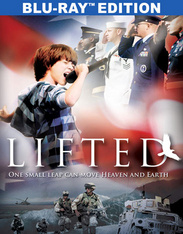 "Lifted" tells the story of a thirteen year-old boy named Henry, a middle school student in Alabama, who finds refuge in music from personal challenges such as, a drug addicted mother, a reservist father called to active service in Afghanistan, the financial stress of a reservist's pay, a racist, redneck grandfather, and bullies. With the help of a local pastor, Henry decides to enter into a singing competition in an attempt to triumph over his obstacles. Starring Uriah Shelton ("The Glades") and Dash Mihok ("The Day After Tomorrow").