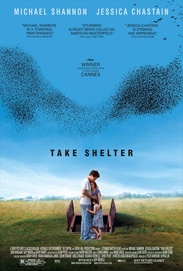 Following his acclaimed debut, Shotgun Stories, writer/director Jeff Nichols reteams with actor Michael Shannon to create a haunting tale that will creep under your skin and expose your darkest fears. Curtis LaForche lives in a small town in Ohio with his wife, Samantha, and daughter, Hannah, a six-year-old deaf girl. When Curtis begins to have terrifying dreams, he keeps the visions to himself, channeling his anxiety into obsessively building a storm shelter in his backyard. His seemingly inexplicable behavior concerns and confounds those closest to him, but the resulting strain on his marriage and tension within his community canât compare with Curtisâs privately held fear of what his dreams may truly signify. Take Shelter features fully realized characters crumbling under the weight of real-life problems. Using tone and atmosphere to chilling effect, Nichols crafts a powerful psychological thriller that is a disturbing tale for our times.