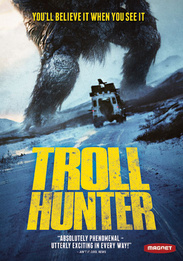 The government says theres nothing to worry about  its just a problem with bears making trouble in the mountains and forests of Norway. But local hunters dont believe it  and neither do a trio of college students who want to find out the truth. Armed with a video camera, they trail a mysterious poacher, who wants nothing to do with them. But their persistence lands them straight in the path of the objects of his pursuits: Trolls. They soon find themselves documenting every move of this grizzled, unlikely hero  The Troll Hunter  risking their lives to uncover the secrets of creatures only thought to exist in fairy tales.

Rated PG-13 for some sequences of creature terror.