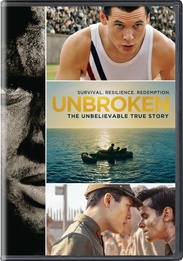 Academy AwardÂ® winner Angelina Jolie directs and produces Unbroken, an epic drama that follows the incredible life of Olympian and war hero Louis "Louie" Zamperini (Jack O'Connell) who, along with two other crewmen, survived in a raft for 47 days after a near-fatal plane crash in WWIIâonly to be caught by the Japanese Navy and sent to a prisoner-of-war camp.

Rated PG-13 for war violence including intense sequences of brutality, and for brief language.