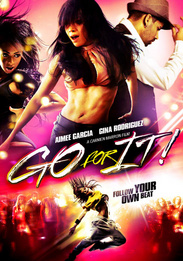 GO FOR IT!, the Audience Award winner and an official selection of the 2010 Chicago International Film Festival is an inspirational dance (hip-hop) drama. Carmen is a 19 year old student who is trying to find her identity, raised in the inner-city of Chicago. She spends most of her time in underground clubs enthralled with her true passion in life, dance. She proves herself to the tough streets of Chicago as she follows her own beat. Born a first generation Mexican-American, she is faced with what her parents expect and what her heart is demanding. Afraid to believe in herself Carmen is put to the test, when she is challenged by her professor to audition for a formal dance school in California. She is torn between a chaotic family, love interest and her best friendâs abusive relationship. Can Carmen overcome lifeâs obstacles and take the biggest chance of her life or will she fall victim to self-sabotage?