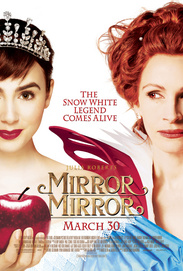 After a beloved King vanishes, his ruthless wife seizes control of the kingdom and keeps her beautiful 18-year-old stepdaughter, Snow White, hidden away in the palace. But when the princess attracts the attention of a charming and wealthy visiting prince, the jealous Queen banishes the girl to a nearby forest.

Taken in by a band of rebellious but kindhearted dwarfs, Snow White blossoms into a brave young woman determined to save her country from the Queen. With the support of her new friends, she roars into action to reclaim her birthright and win back her Prince in this magical adventure comedy that will capture the hearts and imaginations of audiences the world over.

Rated PG for some fantasy action and mild rude humor.