Dr. Who: A Christmas Carol 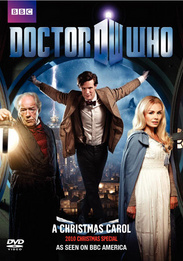 Matt Smith and Karen Gillan return as the Doctor and his companion in an all-new Doctor Who Christmas special on Blu-ray and DVD. Amy and Rory are trapped on a crashing space liner, and the only way the Doctor can rescue them is to save the soul of a lonely old miser, Kazran Sardick. But Sardick, the richest man in Sardicktown, beyond redemption? And what is lurking in the fogs of Christmas Eve? Writer/Executive Producer Stephen Moffat (The Original UK Coupling, Sherlock) describes the special, âWe're going for broke with this one. It's all your favourite Christmas movies at once, in an hour, with monsters. And the Doctor. And a honeymoon. I've honestly never been so excited about writing anything. I was laughing madly as I typed along to Christmas songs in April.â Special guest stars include Michael Gambon (Harry Potter) and Welsh singing sensation Katherine Jenkins.