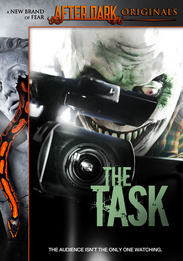 Something diabolical is taking place on the set of "The Task," a new reality show in which players compete for a cash prize by enduring a night in an abandoned prison and completing a series of creepy tasks designed for maximum terror. As six college students explore, things start to go amiss. Locked in this decrepit, labyrinthine prison, the contestants and the production staff start to realize that the scary reality show they thought they were taping has become real horror.