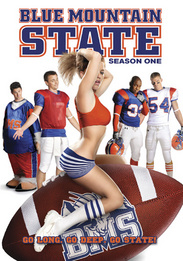 Nothing is out of bounds in the first season of this SPIKE original comedy. At the center of the action are the Blue Mountain State Goats, the team with the nastiest sacks in all of college football. With a freshman lineup that includes a backup quarterback whod rather party than play, a star running back who cant score with the ladies, and a team mascot who redefines personal foul, will they be able to juggle football, girls, class and nonstop hazing? Blue Mountain State: Season One is the rudest, dirtiest comedy to ever hit the field.