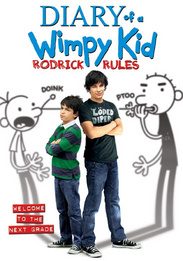 Greg is back with problems new and old. Greg chronicles a hilarious litany of problems, alternating between home and school, focusing this time on the particular punishments of his reprobate older brother, Rodrick.

Whether Greg is suffering on the swim team or trying out for the K-12 school talent show as Magician's Assistant to a First Grader, his escapades are united by his struggle to avoid embarrassment.

Rated PG for some mild rude humor and mischief.