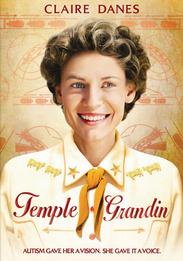 Based on the writings by its title subject, HBO Film's Temple Grandin starring Golden Globe® winner Claire Danes is an engaging portrait of an autistic young woman who became, through timely mentoring and sheer force of will, one of America's most remarkable success stories. The visually inventive film offers stunning insights into Grandin's world, taking the audience inside her mind with a series of snapshot images that trace her self-perceptions and journey from childhood through young adulthood to the beginning of her career, and beyond.