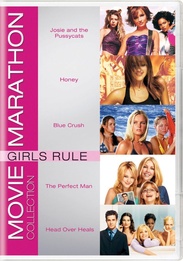 Josie and the Pussycats: Rachael Leigh Cook, Tara Reid and Rosario Dawson are small-town musicians with big dreams. When a record executive (Alan Cumming) makes them rock stars, they think theyve got it alluntil they learn they are part of a plot by the record labels CEO (Parker Posey) to control the youth of America. Honey: Pulse-pounding music and awesome dance moves ignite this exhilarating story of passion, determination and the courage to follow your dreams. Jessica Alba is a dancer who finds inspiration in the energy of the streets. Mekhi Phifer and hip-hop sensations Missy Elliot and Lil Romeo also star. Blue Crush: Theyre three pals with one passion: fulfilling their dreams of living the ultimate adventure amid the island paradise of Hawaiis fabled North Shore! Hailed as an exhilarating fun ride by People Magazine, this is an adrenaline-powered story of heartfelt friendship and nonstop action. The Perfect Man: Hilary Duff, Heather Locklear and Chris Noth star in this hilarious yet heartwarming comedy about mothers, daughters and the outrageous lengths people will go to for love. Holly Hamilton (Duff) is on a mission to find her single mom (Locklear) a perfect maneven if she has to make him up! Head Over Heels: Amanda Pierce (Monica Potter) unexpectedly finds herself sharing a Manhattan apartment with four sexy supermodels who give her the ultimate makeover and bring her into their fabulous world. Freddie Prinze, Jr. co-stars in this wild blend of big laughs, high fashion and foul play!