Shoot First and Pray You Live 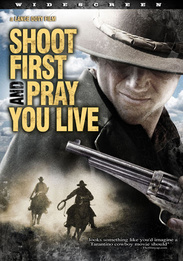 Nowhere in the vast spread of the desert has there ever been a greater legend told than the bloody fued between Red Pierre and the phantom gunfighter, Bob McGurk. Red Pierre has traveled through the mountains from a Mexican monastery to avenge his dying father, who was fatally wounded by the infamous outlaw Bob McGurk. But before Pierre can have a showdown with this invincible gunman, a gang of bandits captures him. Instead of fighting them, he decides to join forces and rides on with the wild marauders. The final face-off with McGurk has been a long time coming, and Red Pierre will stop at nothing to see that justice is served.