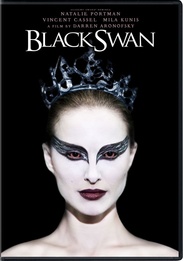 BLACK SWAN follows the story of Nina (Natalie Portman), a ballerina in the New York City Ballet trying to make it to the top. When artistic director Thomas Leroy (Vincent Cassel) decides to replace prima ballerina Beth MacIntyre (Winona Ryder) for the opening production of their new season, Swan Lake, Nina is his first choice. But a new dancer, Lily (Mila Kunis), also impresses Leroy and becomes Ninaâs competition. Nina fits the White Swan role perfectly with her innocence and grace, but Lily is the personification of the Black Swan with her fiery personality. As the two young dancers expand their rivalry into a twisted friendship, Nina begins to get more in touch with her dark side with a recklessness that threatens to destroy her.