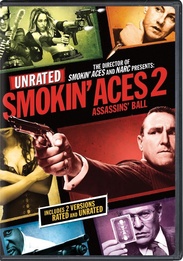 Walter Weed (Tom Berenger) is an unassuming desk jockey at the FBI when the Bureau uncovers a plot to assassinate him. A team of degenerate, psychotic assassins dispatched by mystery man Hal Leuco to win a huge bounty includes a resourceful beauty who has a unique method of killing her prey (Martha Higareda), a power-tool wielding psychopath (Vinnie Jones) and a deadly master of disguise (Tommy Flanagan). Also in the hunt is the fan-favorite Tremor family from the original film, featuring nymphomaniacal gun-nut (Autumn Reeser) and her lethal kinfolk (Maury Sterling, Michael Parks and C. Ernst Harth). Baker (Clayne Crawford), the agent in charge of the operation, puts himself and his team in the line of fire to defend Weed, but it's not until the smoke clears on the film's explosive climax that the surprising identity of the plot's mastermind is revealed.