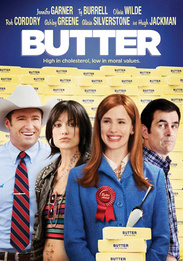 A tale of competition at its most cut-throat, BUTTER surveys the raw ambition of Laura Pickler (Jennifer Garner), the wife of Bob Pickler (Ty Burrell), Iowa's long-reigning champion butter carver. For 15 years, Laura has relished her high-profile role as the beautiful, loyal helpmate to her affable, artistically gifted husband. But when Bob is pressured to retire and allow someone else a chance at glory, an indignant Laura decides to enter the competition herself. She is first in line on sign-up day, only to see her odds of victory fall below 100 with the arrival of an unlikely yet formidable contender: 10-year-old Destiny (Yara Shahidi), the African-American foster child of local couple Julie and Ethan (Alicia Silverstone and Rob Corddry). And that's not all. Bob's would-be mistress, bad-girl stripper Brooke (Olivia Wilde) also declares her candidacy, as does his #1 fan, Carol-Ann (Kristen Schaal).

Facing three opponents, mocked by her stepdaughter Kaitlen (Ashley Greene) and furious with her husband, Laura resolves to do whatever it takes to win. And if that means resorting to sabotage  and recruiting her dim-witted former boyfriend Boyd (Hugh Jackman) as a co-conspirator  then so be it.

Rated R for language, sexual content and brief drug use.