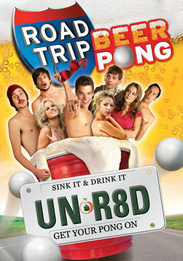 Its Road Trip - Beer Pong! Three college roommates are on the ride oftheir lives when they drop everything to join a bus full of sexy, scantily clad models tocompete in the ultimate sport competition: the National Beer Pong Tournament. Along the way, theyll be stalled by some of the most unusual roadside attractions ever  including a hitchhiking, gun toting beauty, a grandmother-mother-daughter stripper squad, and the lovely ladies of Chastity Until Marriage. With all these detours will they reach the competition and win the ultimate title? Getting Your Pong On has never been this fun!

Rated R for pervasive crude and sexual content, nudity, language and drug use.