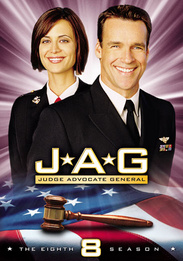 JAG (Judge Advocate General) is an elite legal branch of military officers trained as lawyers who investigate, prosecute and defend those accused of crimes in the military, including murder, treason and terrorism. Navy Cmdr. Harmon 'Harm' Rabb, an ace pilot turned lawyer, and Marine Lt. Col. Sarah 'Mac' MacKenzie, a beautiful and strictly by-the-book officer, are colleagues, both with similar high standards, that often find themselves clashing with one another as they take different routes to solve cases. Assisting them with their mission is Navy Lt. Bud Roberts, a lawyer who often surprises his superiors with the breadth of his knowledge, and their boss, the no-nonsense Admiral Chegwidden, a former Navy Seal.