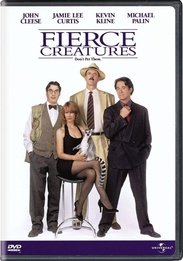 Rollo Lee, a middle aged genteel man, assumes control of a British zoo that's just been bought by Octopus, Inc., owned by American billionaire Rod McCain. Lee needs profits at the zoo to go up 20% or he'll lose his job. Noting that some of entertainment's greatest financial success comes from violence, he orders that only the "fierce creatures" be kept on display. This upsets the zoo workers, including Adrian "Bugsy" Malone, the spider wrangler. Lee, however, has more problems as newcomer Willa Weston, a smart corporate type who wears tight, revealing dresses, and McCain's greedy son, Vince, arrive in England to take over the zoo. As Vince turns the zoo into a big advertising circus, both Willa and Rollo take to the animals and help the others fight to keep the zoo open.