Out of Practice: The Complete Series 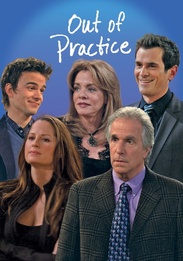 Ben Barnes (Christopher Gorham) is an earnest couples counselor who lives in the shadows of his entire family, all of whom are doctors and don't consider him to be a "real" doctor because he doesn't have M.D. after his name. However, Ben might have the best prescription as he tries to keep his wacky clan together. Created by Emmy award-winners Joe Keenan ("Frasier, "Desperate Housewives") and Christopher Lloyd ("Modern Family," "Frasier"), the comedy series aired for one season beginning in Fall 2005. The series also stars Jennifer Tilly ("Family Guy," Bullets Over Broadway) and Paula Marshall ("Gary Unmarried," "Gortimer Gibbon's Life on Normal Street")