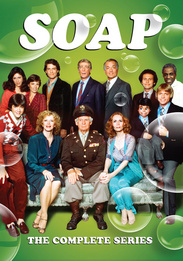 The controversial sitcom that defined the late '70s and became an instant classic, SOAP took viewers into the homes of not one but two of the most dysfunctional families ever - and we couldn't help but embrace every eccentric one of them!

Rediscover the comical saga of the Tates and the Cambells with the entire series of SOAP!