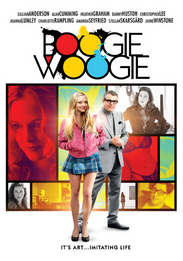 An all-star cast has wicked fun in skewering the pretentions and superficiality of the art world in this comic romp by director Duncan Ward. Emmy and Golden Globe winner Gillian Anderson (The X-Files) is a cougar on the prowl for a new boy-toy; Heather Graham (Boogie Nights, Austin Powers: The Spy Who Shagged Me) is an ambitious assistant who will do anything to advance her career; Tony winner Alan Cumming (X-Men 2) is a hapless dealer with too much decency for his own good; Danny Huston (Robin Hood, Clash Of The Titans) is a rapacious dealer; and the legendary Christopher Lee (The Lord Of The Rings trilogy) is the owner of the priceless work of art titled âBoogie Woogieâ that they all circle with naked desire. Beauty may be in the eye of the beholder, but art ALWAYS has a price.

Rated R for strong sexual content, graphic nudity, language throughout and some drug use.