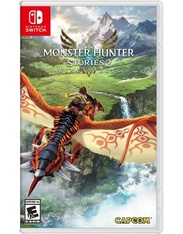 Monster Hunter stories 2: Wings of ruin offers both RPG and monster Hunter fans a unique new experience with a rich storyline Featuring charming characters, challenging quests, and friendly encounters with familiar monsters from the popular series. After rathalos vanish across the world, players assume the role of a young monster rider who is the grandchild of the illustrious rider red. Together with the mysterious wyverian ena and the self-proclaimed felyne hero navirou, players embark on a sprawling adventure that spans numerous destinations. As players hatch, train, and live alongside their monster, they will encounter numerous new allies, foes and challenges on their path to unravelling the prophecy surrounding the Wings of ruin.

Team up with familiar creatures from the Monster Hunter universe and a charming Crew of companions for an emotional and expansive journey. Make use of Assorted monster Hunter weapons to target monsters' Weak points, employ powerful skills to control the flow of battle, and unleash devastating kinship attacks with your monstie. Create your own unique character, and use the power of your kinship Stone to live in Harmony with the monsters others fear. Collect and hatch Eggs to build a party of monsters with specific abilities and strengths, train them to become unique and powerful companions, and craft new weapons and armor Join up with friends for tag-team multiplayer battles and exploration.