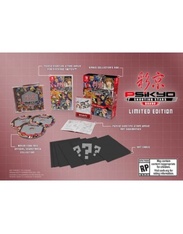 Classic shooting games in a retro compliation for NSW! Samurai Aces - The Shogun's daughter has been kidnapped by an evil cult, and it is up to six unlikely heroes to rescue her before she is sacrificed to resurrect a demon god! Originally released in 1993. TENGAI - The militaristic cult Shinrano has captured the Shogun's daughter in order to sacrifice her to their demon god. The only ones that can stop them are a group of misfits that must rise up to become heroes! Originally released in 1996. [SENGOKU CANNON/SAMURAI ACES 3] - When villagers suddenly begin to disappear, a group of heroic mercenaries returns to uncover the mystery. But even they cannot prepare themselves for the twisted plot of soul-bearing machines and a missing princess that lies behind the disappearances. Originally released in 2005. GUNBIRD - What do a witch girl, a robot, an adventurer with a jetpack, a martial artist, and a monkey warrior have in common? They all seek the pieces of a magic mirror in order to make a wish! Originally released in 1994. GUNBIRD2 - Seven quirky warriors face a mighty challenge: claim the legendary potion of a divine god in order to fulfill their grandest wishes! Originally released in 1998. GUNBARICH - A spin-off title of the "Gunbird" series, the young witch Marion and her anchor-wielding classmate Gurutan star in this charming game of colorful blocks. Originally released in 2001. Features- Pixel Perfect: Experience classic shooters in beautifully rendered high definition. Play Your Way: Choose your gameplay experience with horizontal mode, Vertical TATE Mode, or hand a JoyCon to a friend in local multiplayer. The Arcade Comes Home: Multiple difficulty levels and settings make sure there are no quarters needed.