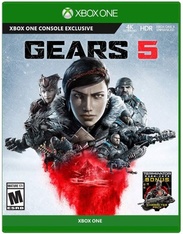 Never fight Alone Play solo or with a friend in local split-screen co-op, or online co-op. Battle alongside your friends anywhere with cross-play between Xbox One and PC. Discover the largest Gears world ever Explore Sera. Skim across glaciers, sail over deserts and descend into sunken ruins to discover the largest and most diverse Gears world ever created. From one of the most acclaimed game franchises in history, Gears 5 delivers an epic campaign and brutal action across five thrilling modes. Campaign: With all-out war descending, Kait Diaz breaks away to uncover her connection to the enemy and discovers the true danger to Sera - herself. Escape: A new, aggressive, high-stakes co-op mode featuring a three-player suicide squad that must work together to take out enemy hives from within Versus: May the best team win! With 10+ other game types plus new and classic maps. Versus rewards every competitive style, from casual to pro Horde: Endure 50 waves of ever-tougher enemies using new hero abilities, building defenses, collecting power, leveling up your skills and working as a team Map Builder: Create custom Escape hive maps and experiences to share with and challenge your friends Pre-order any edition of Gears 5 at Amazon by September 10, 2019 and receive 7 days of Boost and the exclusive NCOG Marine Lancer weapon skin.* Bonus, available for a short time: early disc versions of the game will come with the Terminator Dark Fate Character Pack, featuring Sarah Connor and the T-800 from the film; look for specially marked packages, while supplies last.*Get access to the Gears 5 Tech Test with your Gears 5 pre-order or your Xbox Game Pass membership, and be the first to play Gears 5 and help create the future of Versus multiplayer