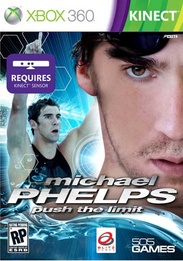 Take a competitive sports journey with one of the most celebrated athletes in history through Michael Phelps: Push the Limit, the first controller-free swimming experience to capture your true movements and translate them into accurate game play. The game utilizes Kinect for Xbox 360's unique capabilities to let you go beyond the pool in one of the most realistic and intense sports simulations ever created. The entirely new game play mechanic lets you accurately master the action of gold medal swim strokes and learn techniques that help Michael Phelps dominate his sport. With one-hundredth of a second often the difference between winning and losing, every stroke's importance is amplified and the room for error is razor thin.

In Career Mode, you compete in successive tournaments and travel to some of the most breathtaking locales the sport has seen. Race in progressively more challenging competitions, trekking from heated outdoor pools set against icy mountain ranges, to a Japanese dojo, to a huge, 80,000 seat outdoor arena as Phelps guides you along the way with tips and tricks of the trade. The path to glory culminates with the Annual Games tournament where you can find yourself up against the best swimmers in the world -- including Michael Phelps!