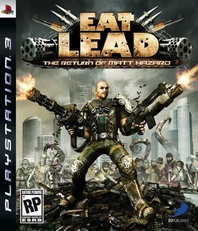 Published by D3 Publisher of America

Get ready for a fictional account of the world's most popular video game hero...of the 1980s. Matt Hazard is coming out of retirement and making his next-gen "comeback" against all his old enemies in a hilarious parody of the last 25 years of gaming. In Eat Lead: The Return of Matt Hazard, videogame action hero Matt Hazard gets his chance to prove once and for all that he is the king of shooters when the new owner of mega game publisher, Marathon Megasoft, gives Matt his comeback role starring in a new title for next-gen consoles that pits him against all of his memorable foes from videogames past. In the world of Eat Lead, however, everything stops being a game and becomes reality when it is clear that someone is using the new game to bring about Matt's death once and for all. With only the mysterious "QA" to help him, Matt must fight against a legion of Marathon Megasoft catalogue of videogame characters to keep it from being "Game Over" forever. Eat Lead pays homage to the games of yesteryear with a menagerie of classic enemies such as zombies, space marines, cowboys, genetically mutated super snipers, and more and an expansive level environment design that reflects videogame history in a next-gen package. The game fires on all cylinders with explosive artillery and combat moves to help gamers escape from a variety of predicaments including radically-changing environments during gameplay via "hack effects" Hazard's nemesis uses by altering the game's code on the fly. Throughout the adventure, players will utilize a strategic cover system dubbed "point and cover," upgradeable weapons and different interactive melee moves to attack and outsmart foes.