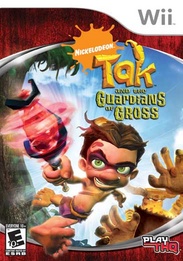 Tak is back in his most Epic video game ever! As the keeper of the power of Juju, it's Tak's responsibility to care for the sacred Juju shrines. Unfortunately, Tak accidently frees the four "Grosstrosities" -Stink Giant, Slime Giant, Landfill Giant, and Molten Cheese Giant- who were trapped in the shrine. These giants were trapped because they were so disgusting that they were just too gross to walk the earth. Tak must seek the help of four new Jujus in order to defeat the "Big Gs" before they cover the world in their stinky foulness.